A few years ago, I attended a Christian men’s retreat at a beautiful, rugged lodge nestled in the thin air of the Colorado Rockies. It was a well-organized and spiritually meaty retreat. A few years prior, I attended one at the same location. Both retreats aimed right for the heart: no hype, no fluff. I like that. 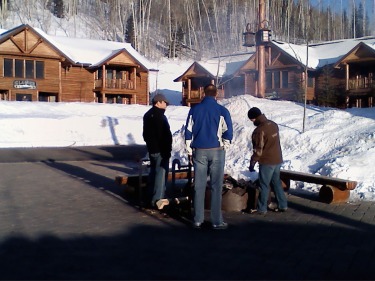 Healing prayer was the topic of the Saturday morning session. I was familiar with it. I had been practicing and teaching healing prayer for twelve years. The leader and his team did an excellent job demonstrating it to all 430 men in attendance. The follow-up assignment was for the group of men in each cabin to duplicate the leaders’ example. I was curious how this would go since most attendees had not done this before, but I also knew that healing prayer was a work of God, not of men. I looked forward to what He would do. Usually, if we cooperate with God a little, He’ll do a lot.

Our group of thirteen gathered in our “cabin” at the lodge. We had only known each other for a couple of hours, if you exclude the night of sleep. The most important fact I acquired in that time, and one for which I was most grateful, was that no one snored.

There was that awkward start by someone saying, “Okay, so how are we going to do this? Well, let’s begin by each person telling the group your name.” That was a stalling technique because most were uncomfortable with the task at hand. The assignment was clear: pray to select someone to sit in a chair in the middle of the group, and then pray for him as we felt led by the Holy Spirit.

As instructed, we prayed for God’s leading. After three minutes someone asked whom God had placed on our heart. One of the men requested that we not hurry the process and requested five more minutes to pray about it. We did, but it was soon clear that all, save one, was ready to present their name. At the end of the allotted time, we divulged the nominees. As some expected, because God answers prayer, each in turn named the same name. The one who requested the five-minute extension abstained.

I don’t remember his name, but let’s call him Ted. With trepidation Ted separated himself from the anonymity of the group to become the center of its attention. Men shot glances at each other looking for an example to follow on to what to do next. The three of us approached Ted placing a hand on a shoulder. The others followed suit as best they could fit, and then we focused on how God wanted us to pray for the stranger.

After a couple of minutes, we offered some verbal prayers on his behalf. One of the men more inexperienced in this type of prayer was having a serious internal struggle of some sort. Just as I was about to suggest that we pray for him, he said, “I don’t know if this makes any sense, but I see a yellow bicycle. It’s not just any bicycle. It’s an old one, maybe from the 50’s. One of those heavy bikes with the big fat tires. It’s screaming yellow. Does that mean anything to you Ted? It makes no sense to me.”

A bit disheartened, we continued to pray. But the Holy Spirit must have been helping Ted sift through his memories and emotions. He soon shifted in the singular seat. His breathing deepened as tears welled up in his eyes. He started heaving and streams of tears flowed down his face. Someone handed him a tissue. We continued to pray for the hidden work God was doing deep in his heart.

With twelve now united hearts and twice as many hands stretched out toward or upon him, he explained, “When I was a boy, my dad was a pastor. We were always poor. The other kids got brand new sleek, fast banana bikes on their birthdays one year. On my birthday,” he continued fighting against intense emotions, “my dad gave me a bike. It was the only one he could afford. He had saved money for months to surprise me with it. It was old, heavy, and screaming yellow. All my friends laughed at me that day, and for many days thereafter.” He wept.

“On that birthday,” he said emphatically, “I swore to become wealthy enough to buy only new things. I have kept that boyhood promise. I have driven myself hard to become successful and wealthy.” He paused. “But I have become a mean, bitter, unloving person. Today I would give away all I have to be the godly man my dad was.”

The box of tissues passed from man-to-man.

“God has shown me,” Ted concluded, “that I don’t have to be the man that I am. With God’s help, I can change. I can become like my dad, and I can become more like Christ.”

It took a while, but we prepared ourselves for the second round of prayer. Again, after three minutes of prayer we were ready to present our names. Every man, in turn this time, shared the name of the one whom God had placed on his heart.

With little effort of our own, we had become experienced at cooperating with God as He healed in our midst.

Dr. Rob Oberto is the award-winning author of “Intimacy With God: Extraordinary miracles that opened a skeptic’s heart to God” available from Amazon.